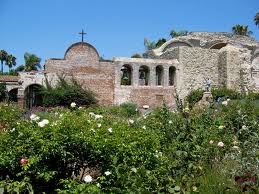 The Indian name was Sajirit or Quanis-savit. Nicknamed “Jewel of the Missions” San Juan Capistrano is perhaps the most famous because of the swallows that arrive mid-March (19 March – Saint Joseph’s day is the traditional arrival date) and stay until Mid-October. This activity has been documented since 1777. While much of the mission has been destroyed a small chapel, thought to be the oldest church in California, is called “Father Serra’s Church”. The chapel is active and has been since the mission’s founding.