The Indian name was thought to be Sonoma. Now part of the Sonoma State Historic Park, the Mission houses the Jorgensen watercolors of Missions of California. There is no active church at the Mission. 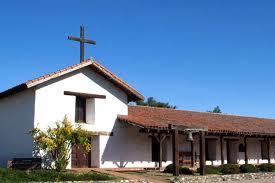 The Mission is in the Sonoma State Historical Park in Sonoma; middle of the Sonoma Valley wine area. From Northbound U.S. 101 take California 37 at Novato. Proceed to Sears Point and turn on California 121 (Sears Point has a large racetrack; stay in the left lane as you approach since 121 and 116 split here and you will exit from the left lane). Follow 121 to Schellville where you turn North onto California 12. Follow that into Sonoma (about 18 miles total). From Southbound 101 take California 116 at Petaluma. Follow 116 to California 121 and then to California 12 at Schellville. Follow 12 into Sonoma (about 16 miles total). In Sonoma take Broadway to Napa Street (basically just stay on 12 until it comes to a “T” intersection at the park) and then 1st Street (East or West) one block North to Spain Street (facing the park from 12 the Mission is at the back right corner). The Mission is at 114 East Spain Street (California Landmark 3). [Alternate for Southbound 101: At Santa Rosa take California 12 directly down to Sonoma. You will, however, be going through several towns along the way and traffic might be congested.]