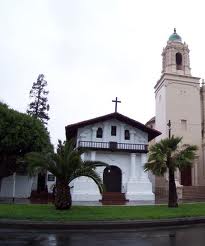 The current site was picked in 1782 because of the harsh conditions at the original mission. The building was built so well is weathered the 1906 earthquake and is considered to be the oldest intact building in San Francisco. California’s first book, Life of Junípero Serra, was written at the mission. There is no active church at the mission although the Mission Dolores Basilica next door is an active church and special services are held in the Mission church at times. [Note: This mission is often called Mission Dolores because its original location was next to a stream called the Arroyo de los Dolores or Stream of Sorrows (named after the Friday before Palm Sunday).]

The Mission is located in the San Francisco Mission District at the corner of 16th and Dolores Streets. Exit U.S. 101 at Mission Street just before 101 turns into city streets. Go left (South) on Mission a couple of blocks to 16th and turn right (West). Three long blocks (third of a mile) brings you to Dolores Street and the Mission is on your left at the corner. Don’t confuse the large chruch on the corner with the Mission which is just behind the large church. They both carry the name “Mission Dolores”.) Coming from the North, follow the signs for U.S. 101. You will end up on Market Street. Look for Dolores Street and make a left turn onto Dolores. Go down three blocks to 16th and you’re there. Parking may be a problem as this is very close to downtown San Francisco (on Sunday, people park on both sides of the median and in the median by the church and Mission to attend services); also, watch out for one-way streets in the area. An alternative might be to use the BART (Bay Area Rapid Transit) system. Park at any outlying BART station and ride the train to the 16th and Mission station. Exit onto 16th Street and walk the three blocks (third of a mile) to the Mission. (California Landmark 327)